Frequent, repeated exposure to high noise levels can cause hearing loss or tinnitus. But you do not need to work in a factory or on a building site to receive high levels of noise. Dr Mike Lower and Bob Davis, of ISVR Consulting, a noise consultancy within the Institute of Sound and Vibration Research at the University of Southampton, consider some unexpected noise problems.

Hearing damage caused by noise at work is often associated with the engineering, construction, manufacturing and process industries. Many of the ‘traditional’ noisy industries have declined, but many of today’s jobs can still be unexpectedly noisy. We regularly assess noise in different workplaces, and sometimes the results are surprising.

Using headsets or earpieces, or on the phone …

Headsets, earphones, telephones and earpieces are used by many people in their work – telephonists, air traffic controllers, operators in fire, police or ambulance control rooms, pilots, typists, TV and radio staff, police officers and security guards. Probably the most numerous are people who work in ‘call centres’ or ‘contact centres’ selling products and services by telephone.

Measuring sound levels from headsets or earpieces is not difficult, but it does require specialist equipment and experience. We use a head and torso simulator known as ‘Kemar’. Kemar has the proportions of a median adult human, but has microphones in place of eardrums. Headphones or earphones fit Kemar just as they would a real person, and the sound levels at the eardrum microphones are typical of the sound levels which would be present at the eardrums of a median human adult under the same conditions. Because the ear canal amplifies sound at some frequencies we have to correct for this when assessing noise exposures.

We have used Kemar to measure noise from headsets in a wide range of situations. So where have we found noise problems?

We have usually found that noise exposures from headsets are below the Upper Exposure Action Value in the call centres and control rooms we have visited, even if operators choose to turn their volume controls up full. We have, however, found exceptions where exposures were high, and for this reason, we advise that sound levels be measured as a precaution. Acoustical treatments of rooms and furnishings can reduce background babble of busy colleagues, allowing operators to reduce their headset volume and hear more clearly. Binaural headsets, covering both ears rather than one, will also help reduce distracting background noise in the worst cases. 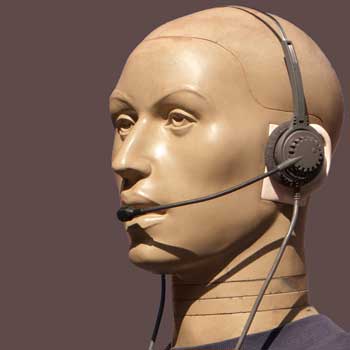 The Kemar manikin with a headset 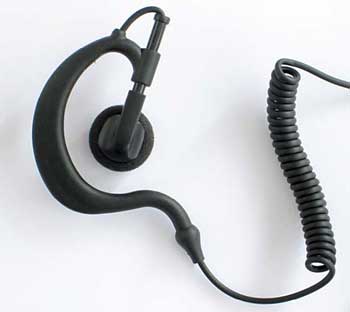 An earhanger style of earpiece

On the street and under cover …

Many police officers and security workers wear radio earpieces (‘earhangers’) which hook over the ear. These earpieces can generate high noise levels if the radio volume is turned up. Where noise exposures were found to be excessive, taking into account the amount of radio traffic, a simple resistor used to be wired into the earpiece connector to attenuate the voltage from the radio to the earpiece. These days, with modern digital Tetra radio terminals, the maximum output voltage can be programmed into the receiver to make it compatible with the earpiece, and there is no need for resistors. However, the noise exposure for a police officer can only be part of a risk assessment – other factors are important, such as the danger of not hearing a critical message in a noisy environment.

Undercover police officers often wear covert earpieces. These fit entirely within the earcanal and receive signals wirelessly from a radio hidden beneath clothing. One former police officer won a claim for hearing damage caused by such a device. Generally, though not always, the wearer has a concealed remote control for stepping the radio volume up or down. We can advise earpiece users not to exceed a particular volume setting unless absolutely necessary. Used sensibly with proper training the earpieces should not present a problem provided the volume is controllable. Many more modern covert earpieces have automatic gain control to limit the maximum sound levels that they generate.

Flying an airliner might not be thought of as a noisy job. Noise levels on the flight deck are usually between about 74 dB(A) and 79 dB(A) LAeq. These levels are not themselves a problem, but pilots need to hear communications through their headsets above the ambient noise. When we measured the noise from crew headsets for an international airline we found that about 30% of the pilots on European and Transatlantic routes might receive noise exposures higher than 85 dB(A) LEP,d. This airline has since replaced its headsets with lightweight Active Noise Reduction (ANR) models. These reduce the ambient sound levels at the ear and permit lower volume settings for the communications. Noise-excluding headsets giving passive noise attenuation were also considered, but the ANR headset was judged the most acceptable all round solution. 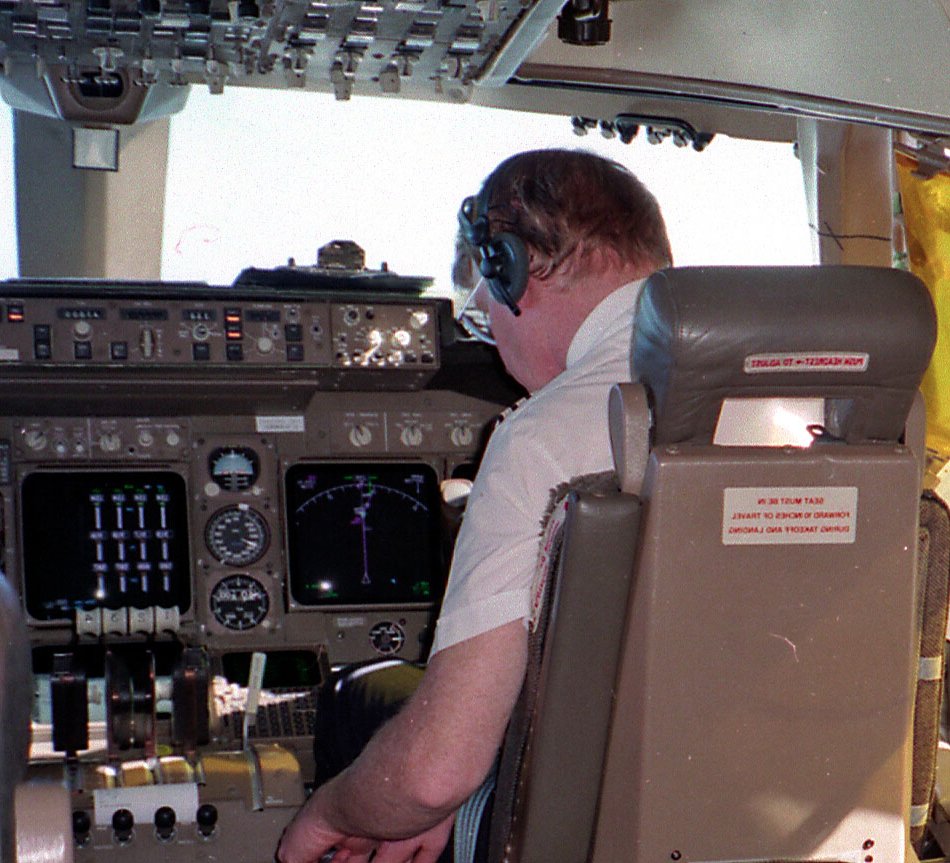 In the cockpit of an airliner 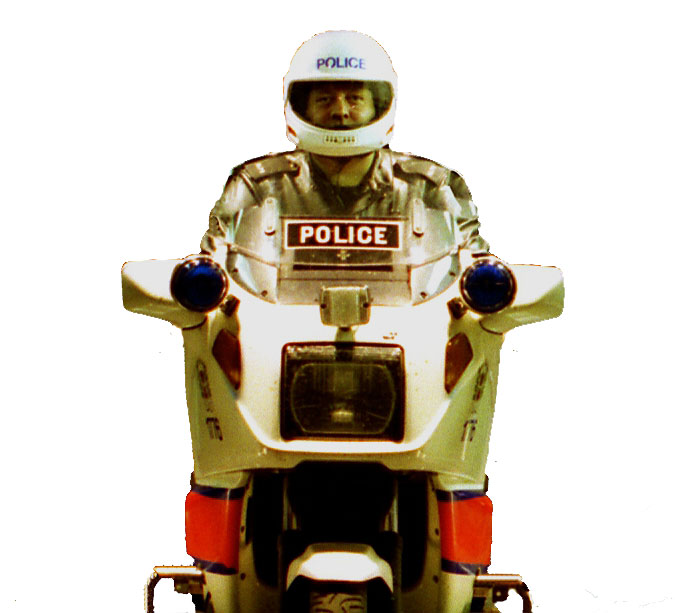 Riding a motorbike for a living can be risky in more ways than one. At the rider’s ear, the wind noise generated by the airflow over the motorcycle, helmet and rider exceeds the noise from the engine and exhaust when travelling above about 40 mph. We have measured noise levels at the ears of a police motorcyclist in a wind tunnel and on the road, with different helmets and different motorcycles. Noise levels range from 78 – 90 dB(A) at 35 mph to 114 – 116 dB(A) at 120 mph or 190 km/h (don’t try this without a blue flashing light). At 70 mph, 112 km/h, the UK national speed limit for motorways and dual carriageways, a motorcyclist’s noise exposure will often reach the Upper Exposure Action Value after just 40 minutes of riding. In some cases 10 minutes exposure time is all it takes.

Wind noise is caused by the turbulent airflow from the top of the windscreen and fairing acting on the helmet. The noise level under the helmet depends as much upon the motorcycle fairing and the windscreen and the rider’s height and position as it does on the helmet design. A helmet which is relatively quiet on one motorcycle can be relatively noisy on another and vice-versa, frustrating attempts to choose or design a ‘quiet’ helmet. Simple modifications to helmet designs will not reduce noise sufficiently.

We have carried out wind tunnel tests in which a motorcyclist wore a helmet containing Active Noise Reduction (ANR) earmuffs. These tests demonstrated that noise levels as low as 70 dB(A) at 50 mph and 80 dB(A) at 70 mph were achievable at the ear. However these levels can only be achieved if the earmuffs are not in rigid contact with the helmet shell, a requirement which may conflict with the need to protect the head against impact. A commercial ANR system for motorcyclists is unlikely to be produced in the foreseeable future. Fortunately, riders can achieve the same noise reduction quite easily, by wearing good earplugs under the helmet. The compressible foam ear plugs from various manufacturers are very effective if properly fitted, and should give adequate noise reduction at legal speeds.  However, if you are not used to wearing earplugs under a helmet, keep an eye on your speedometer; the reduction in noise gives the impression of travelling more slowly, and there is a tendency to speed up without realising.

Up the club, down the disco …

We often hear about people damaging their hearing in clubs and discos. But consider the staff who may be there several nights a week – not just the DJ, but the bar, door and security staff. Noise levels can reach 105 dB(A) on the dance floor, but even at the bars levels of 90 – 95 dB(A) are common. Staff tend to be part-time, and some may also have noisy day jobs, which makes assessment of the individual’s noise exposures very difficult. Solving the problem is not easy. Sometimes staff can be ‘rotated’ between quieter and noisier areas, but this is of limited use where high noise levels mean that the ‘safe’ exposure times can be measured in minutes not hours. The best (and perhaps only) solution is to turn the music down. 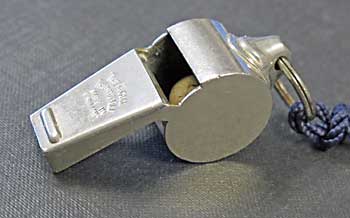 Out of curiosity we measured the sound levels of an Acme Thunderer whistle, as used by soccer referees, train guards, PE teachers and fire-fighters. For short blasts the sound levels alongside the user’s head were surprisingly high at 117 – 119 dB(A). After just 15 seconds of blowing, a whistle user’s noise exposure will exceed the Upper Exposure Action Value, though you won’t see many referees wearing earmuffs.

Small, hand-held, compressed air horns are often used for starting races or other sporting events, in boating, or as temporary emergency alarms. But how loud do you think they are?  The one shown here is one of the loudest that we found, but others weren’t far behind. Pointed away at arm’s length it gave a peak sound level of 123 dB(C) and a steady average level of 116 dB(A) at the user’s ear.  The user’s noise exposure would reach the Upper Exposure Action Value in about 20 seconds per day.

But directly in front of the horn, the level is much higher.  The peak level at 1 metre was 141 dB(C), which is more than the highest peak level permitted in industry, while the average level was 126 dB(A).   A person at 1 metre in front of the horn would get the same noise dose in 2 seconds as someone working for 8 hours in 85 dB(A) of noise. That is definitely a hazard if used maliciously. 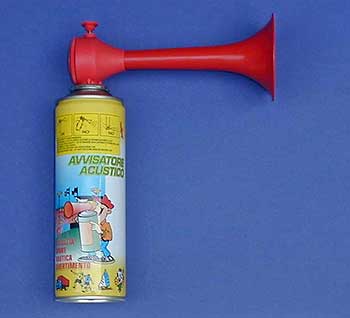 A hand-held horn with a compressed air canister

The risks from noise at work have not disappeared with the decline of the ‘traditional’ heavy industries and the improvements made in controlling noise in factories. New noise hazards have appeared, some almost unnoticed. Hazardous noise can occur in the most unexpected of jobs: consider everything.

This is an expanded, updated and revised version of an article which appeared in the now defunct Management Occupational Health Safety & Environment, Vol 4 No 7, (August 2000) under the title ‘A word in your ear’.  It is just as relevant today.

Daily personal noise exposure, LEP,d, used in the Control of Noise at Work Regulations 2005, is the same as LEX,8h in international standards.