From 1968 to the present: the history of ISVR Consulting

The Institute of Sound and Vibration Research at the University of Southampton is one of the pioneers of university-industry collaboration, and ISVR Consulting can trace its conception to 1966 when an “Advisory Service for Industry” was established within the Institute. 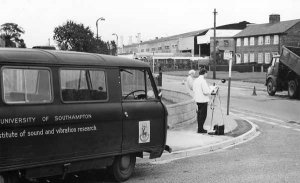 The need for this service arose from the increasing pressure placed upon the Institute by industry to help in evaluating and controlling noise and vibration problems. Initially the service was run informally by the academic and research staff, but it soon became clear that the demand was too great for a ‘spare time’ activity and that the service should be organised on a firmer, commercial footing.

A full-time staff was essential to offer a rapid and confidential service, and on 1st March 1968 the “Industrial Noise Unit” was formally established, with three consultants, as a self-financing group within the ISVR “… to provide, through consultation, assistance to private, industrial, commercial and governmental bodies in resolving problems concerning noise and vibration”. This was the unit which would later become known as “ISVR Consulting”.

In 1968, the Wolfson Foundation awarded the Institute a sum of £30 000, payable over three years, as “pump priming” support to improve and extend the services provided, the funds to be expended in the appointment of a Technical Manager, an Administrative Officer, and the purchase of laboratory equipment and vehicles for use by the Unit. In recognition of this support, the Unit was renamed “The Wolfson Unit for Noise and Vibration Control” (WUNVC).

The WUNVC continued to grow, and by 1970 the staff numbered seven consultants with six technical assistants and administrative staff.

In 1972, a part of the Unit concerned with automotive design work “a specialism distinct from the other areas of involvement of the WUNVC” was formally established as a separate entity under the name “The Automotive Design Advisory Unit” (ADAU) with lab and test facilities at Chilworth to the north of Southampton.

In 1987 the ACHCU and WUNVC were reunited under the name “ISVR Consultancy Services” with Mike House taking the role of Technical Manager.

In the early 2000’s, the Automotive Design Advisory Unit became increasingly involved in marine noise and vibration, a natural extension of the automotive work. Reorganisation and rationalisation of the consultancy activities within the ISVR saw ISVR Consultancy Services and the Automotive Design Advisory Unit coming together under the new title “ISVR Consulting” and sharing common administrative and financial procedures.

In 2009 the former ADAU activities were relocated from their Chilworth outstation to rejoin the rest of the ISVR Consulting facilities within the Wolfson Building and Rayleigh Laboratories on the University’s Highfield campus.  As part of the relocation, old test cells at the western end of the Wolfson Building were refurbished as a Product Development Laboratory, which this houses the former ADAU’s banger rig and automotive testing.

In August 2011, the University of Southampton changed its faculty structure.  The teaching and research part of the Institute of Sound and Vibration Research became an Academic Unit within the new Faculty of Engineering and the Environment, and now shares many administrative and financial staff with the other Academic Units in the faculty, while ISVR Consulting continues as an Enterprise Unit carrying out consultancy and commercially funded contract research.  The new faculty now has an Assistant Dean for Enterprise to support and promote the activities of ISVR Consulting and the other enterprise units.  This reflects an increasing recognition of enterprise activities within the University.  The Wolfson Building now houses the offices of four of the Faculty‘s Enterprise Units in the ‘Enterprise Zone’: not only ISVR Consulting but also the Research Institute for Industry (RIfI), nC2 and E&E Partners.  The Wolfson Unit for Marine Technology and Industrial Aerodynamics (WUMTIA) has now moved to Boldrewood, to be close to the new towing tank, and the Auditory Implant Centre (formerly the South of England Cochlear Implant Centre) has moved to the building next door (B19).

In August 2018 the University of Southampton rearranged its faculty structure, reducing the number of faculties from eight to five.  ISVR Consulting is in the Faculty of Engineering and Physical Sciences.