Headsets, earphones, telephones and ear inserts are used by many people in the course of their work. Examples include telephonists, air traffic controllers, operators in fire and police control rooms, airline pilots, TV camera crew and floor managers, sound engineers, and telesales operators. It is important that the headphones do not cause daily noise exposures which could exceed the Action Values in the Control of Noise at Work Regulations 2005, and which, over time, could damage the wearer’s hearing.

There are established criteria for assessing the risk of hearing damage. but these relate to noise from machinery, equipment or loudspeakers rather than from headphones. These criteria are expressed in terms of the noise exposures or sound levels measured in the workplace. Care is taken when measuring these levels to place the measuring equipment, usually a sound level meter, so that the meter operator and anyone else present do not unduly influence the reading by causing reflections or sound shadows. The reading is therefore representative of an ‘undisturbed’ sound field. The Action Values in the Control of Noise At Work Regulations 2005 are for undisturbed sound fields. We can apply these Action Values to headphone use, but not directly. 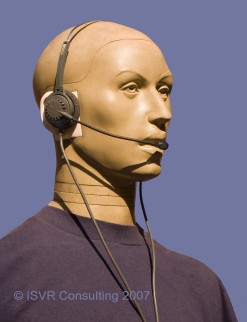 To measure noise levels from headphones we use a manikin, or artificial head and torso known as ‘Kemar’ (Knowles Electronics Manikin for Acoustic Research). Kemar incorporates microphones to measure sound levels at the eardrum positions. The manikin has been designed to be geometrically and acoustically representative of a median adult human and noise levels measured at the eardrum of Kemar are representative of noise levels which would be present at a median human eardrum under the same conditions. Headphones or earphones can be worn by Kemar and will fit Kemar just as they fit a real person and we can measure the sound levels at the eardrum.

When a person is exposed to noise in a room or factory, their ear canals amplify the noise so that the eardrum sound levels are higher than those in the undisturbed sound field. The amount of amplification varies with frequency. Low-frequency sounds are hardly amplified at all while sounds with a lot of energy around 3 kHz are amplified most, by about 15 dB. The amplification for any particular sound depends on its spectrum, i.e. the amount of sound energy in each frequency region.

We measure the eardrum noise levels and spectrum produced by headphones worn by Kemar. We then subtract out the amplification of the ear canal to determine the spectrum and level of an external, undisturbed sound field which would duplicate the levels produced at the eardrum by the headphones. We can use the noise levels of this notional undisturbed field to calculate daily personal noise exposures for the headphone wearer. These noise exposures can be directly compared with the Action Values of the Control of Noise at Work Regulations. A given noise level and spectrum at the ear drum will give a certain risk of hearing impairment whether that noise level is produced by an external sound field (from machines or loudspeakers) or by headphones.

We have used Kemar to measure sound levels and noise exposures from headphones in a wide range of situations. These include

As well as general noise exposure assessments, we have provided expert acoustical evidence where hearing damage has allegedly been caused by noise from headphones, headsets, earpieces or telephones, or in claims of acoustic shock.

Other uses of Kemar

Noise sources close to the ear

Headphones fit over, on or in the ear, but the measurement techniques are equally applicable to noise sources which may be held close to the ear, for example, children’s toys. We have used Kemar to measure the sound from children’s toys for a toy manufacturer and distributor. In addition, the manikin technique has proved useful in measuring noise from power tools such as electric drills or grinders which are sometimes held very close to the head.

We have also used Kemar to measure the insertion losses in air of wet and dry neoprene diving hoods of various thicknesses from 2 mm to 9 mm. Insertion losses may be used to calculate noise levels at the ear when the ambient noise level and spectrum outside the hood is known. The exposure of divers to high levels of noise is recognised and included in the HSE’s Approved Codes of Practice and guidance, L103 (Second edition) Commercial diving projects offshore. Diving at Work Regulations 1997 and L104 (Second edition) Commercial diving projects inland/inshore Diving at Work Regulations 1997. Both of these publications state that “Divers are exposed to a range of noise sources, both on the surface and underwater. These levels may be significant and diving contractors should ensure that the risks are managed”. 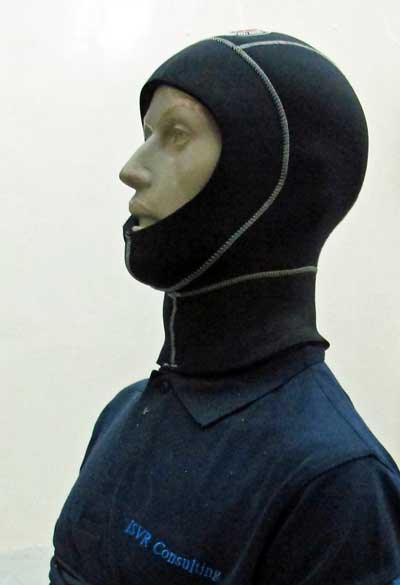