Noise levels under motorcycle helmets can be very high. Above about 65 km/h or 40 mph the wind noise generated by the airflow over a motorcycle and rider exceeds the noise from the motorcycle itself. Daily noise exposures of working motorcyclists without hearing protection may regularly exceed 90 dB(A).

What does the noise under a police motorcyclist’s helmet sound like? 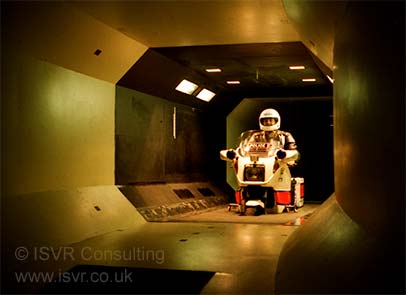 Police motorcycle in the wind tunnel

Wind tunnel tests with a flying helmet containing active noise reduction earmuffs demonstrated that noise levels as low as 70 dB(A) at 80 km/h and 80 dB(A) at 115 km/h were achievable at the ear. Similar systems within a motorcyclist’s helmet suggest that this potential will not be realised unless the earmuffs are well isolated from the helmet shell and liner. Another method of achieving similarly low levels is to wear good earplugs. Most police forces in the UK are now providing headsets with earpieces that are worn under the helmet and provide radio communications as well as noise reduction.

If you ride a motorcycle and your hearing sounds muffled afterwards, or if your ears ring, then you are suffering temporary hearing damage, which, if repeated regularly, may become permanent hearing damage. We recommend you consider wearing earplugs under the helmet.  Because the earplugs reduce the noise, you may seem to be travelling more slowly, so take extra care to check your speed until you get used to the earplugs.

This project was carried out for the Home Office by ISVR Consulting, the Department of Aeronautics and Astronautics, the Wolfson Unit for Marine Technology and Industrial Dynamics, and Hampshire Constabulary.  We often measure noise exposures of motorcyclists for various police forces in the UK, and the noise of radio communications is added to the wind noise.

We have also measured the noise exposures of motorcyclists for several police forces and for one of the motorist breakdown rescue services.  The measurements were carried out during the motorcyclists’ normal duties to determine whether their full-day noise exposures were below the limits of the UK regulations.

References in the open literature: