Many aircraft and spacecraft components are exposed to high levels of noise-induced vibration at take-off and in flight. This can cause problems such as: 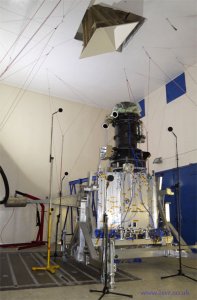 To make sure components will not fail under this acoustic stress they are subjected to a high level noise field.

With spacecraft components, the stress occurs for a short time at take-off, typically one or two minutes. During testing the noise exposure is as close to real conditions as possible.

Aircraft components are more likely to be stressed for perhaps thousands of hours, so that real-time testing would be impracticable. In these cases accelerated testing is carried out with far higher noise levels but for much shorter test periods, typically one or two hours.

For spacecraft components the excitation spectrum is usually specific to the launch vehicle, but standard levels have been accepted for aircraft parts. These are specified in various documents, for example MIL-STD-810, or BS 3G 100. In either case overall levels of up to 160 dB may be required in various frequency ranges between 25 Hz and 10 kHz. Ceiling-mounted and suspended horns are used as high-intensity noise sources.